There She Was…Smiling At Me 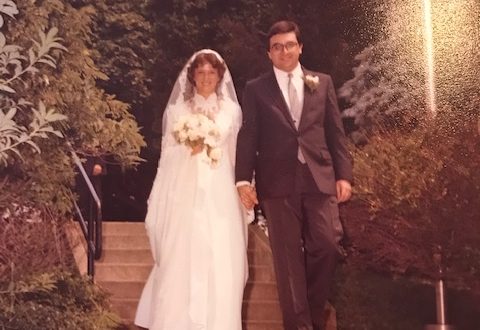 About three days before the wedding, when I was already living in our apartment in Indiana, PA, while my wife-to-be was still living in Pittsburgh, the phone rang after I got home from work, my sister on the other end.

“Promise you won’t be mad?” she asked rather sheepishly, knowing how my Italian temper had already been frayed as the wedding day approached. “I won’t be mad,” I calmly assured her, the steam rising inside me, waiting for some horrible news. “Whales is in the hospital. He’s having his appendix out.”

“Whales” was my best friend in high school and was to have been one of my ushers. The “was” became apparent with the news.

Astounding my sister as well as myself, I handled the situation with logic and cool. Murphy’s Law would not wreck our wedding. We had taken every precaution to see to that. So this little piece of news was not going to develop into a calamity. After hanging up with my sister, I called my then-fiancé and decided to ask a good neighbor of hers whom we also knew from our shared alma mater, Indiana University of Pennsylvania, to fill in for the ailing Whales.

My wife is a super planner, and as the day got closer and closer, she became a real stickler for double-checking everything. “Are everybody’s rooms ready?” “Yeah.” “The band knows the directions?” “Yeah.” “Rustic Lodge didn’t forget about the reception there?” “They do this all the time.” “That’s what I mean! They know it’s for us, right?” “Don’t worry, everything’s ready, I promise.” “How about the photographer?” “You just talked to him a couple of days ago.”

“I know, but remember what happened to your mom? The photographer forgot about the wedding in the church and now she only has pictures of her reception and the fruit sculpture!” She was right. And I didn’t know if we were even going to have any fruit sculpture.

The next thing to worry about – it seemed a never-ending list – was the rehearsal. Because of scheduling at the Catholic church on the IUP campus, we had to have the rehearsal right around dinnertime Friday. Known then as the Newman Center, that church really was where our first “date” happened, and it played such an important role in our college lives at IUP that we wanted to get married there. Little did we realize, though, how difficult it would be for two Catholics from the Diocese of Pittsburgh to get married in a Catholic church in the Diocese of Greensburg.

It’s all the same religion, right? Should be a snap, right? Wrong. The red tape. Unreal! But it all came together, the paperwork got filed, the rehearsal came off without a hitch, and before we knew it The Morning had arrived.

I stayed cool, watching Bugs Bunny cartoons in the hotel room while all kinds of activity went on outside – the photographer remembered to come and was taking shots of the girls, my best man and his brother decorated the Cadillac a relative loaned us for the day, and well-wishers popped in to see how I was faring.

You know the feeling just before going out on stage? Magnify that about 100 times. I knew something great was about to happen, but I felt scared stiff anyway. So happy, so hopeful, so terrified. Like the butterflies in my stomach were still caterpillars.

My clunky old VW Beetle held out long enough to get us to the Newman Center and soon the moment was upon us. I thanked all the guys, made sure my cousin had the rings, took a deep breath, and began filing into church to take our positions.

My nerves began shake-rattle-and-rolling again. This is it, Hayes.

The processional played as each bridesmaid slowly came up the aisle and was met by an usher. God, I thought, I was sooooo nervous. I honestly had never been that jittery before in my life.

She turned the corner on her dad’s arm. She smiled at me. And suddenly I couldn’t figure out what in the world I was so nervous about. I had it all, and there she was in a shining white dress, smiling at me.

That same beautiful, warm, loving, happy, sunshine smile has brightened every day ever since. Thirty-eight years’ worth now, and counting.