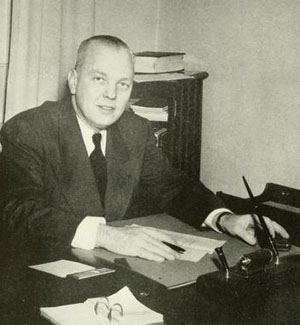 The Big Idea: Leaders should be visible.

Each morning, as the sun tried to push through the watery cloudiness that stubbornly enveloped the sloping hills of Indiana, Pennsylvania, Dr. Willis Pratt stepped out of his flat and went for a stroll.

Usually with a member of the maintenance crew in tow, Dr. Pratt made his way across the campus of Indiana University of Pennsylvania – or IUP, my alma mater, and the school where he served as president from the mid-1940s through the late ’60s – each dawn.  He’d point out places where a sidewalk may have begun to crack, or some hedges needed trimming, or a fresh coat of paint or spit-shine would make a building look a bit better.  The maintenance fellow would take diligent notes and those projects would help fill his day.

But Dr. Pratt knew something else was happening as he took his daily walk through his beloved university.  He would stop and talk with students on their way to their early morning classes.  He got to know their names and their aspirations, and vice versa.  He shared his love of the school, its grounds, and its people on a one-to-one basis.

He became the tangible personification of IUP, and the genuine affection and respect he received from the student body turned into lasting support for the university as those students became alumni.

And all because he steadfastly went for a morning walk every day.   How different from so many of today’s leaders, who take private elevators to their top-floor corner offices, who are never – ever – seen simply strolling the hallways and cafeterias of their buildings, and who seemingly abhor the prospect of actually engaging in casual conversation with their employees that’s not scripted or pre-scheduled eight weeks in advance.

Some years ago, the Corporate Communications Department of the large company where I was working asked me to coordinate a series of “walking tours” for the CEO, where he would visit with a work group, chat with their employees, share his vision for the corporation, and generate some needed rapport with the frontline troops, as it were.

As feared, however, these visits morphed from their stated team-building intent into high-stress, high-stakes inspections and tests of how well the department being visited could ramp up an impressive show-and-tell for the Big Cheese.  Instead of groups clamoring to be included on the list, they sprinted in the opposite direction and looked for a place to hide.

Not exactly the outcome we were shooting for.

It quickly became apparent that you can’t schedule spontaneity or demand an open spirit of dialogue and idea sharing.  The “walking tours” met an early demise and were never resurrected.  The lines of communication in the best organizations encompass both verbal and non-verbal channels, and we learned that our enterprise wasn’t there quite yet.

In contrast, the students at IUP all those years ago knew Dr. Pratt.  They saw him every day.  They knew he wanted to be a part of their collegiate lives.  He wasn’t holed up in his office, appearing only for pre-staged photo ops or scripted presentations.  They knew they could talk with him, whether in the Oak Grove at the center of campus, in his office in the main administration building, or at his on-campus home.

Can the leaders we know today say the same?  Yes, security and safety are legitimate concerns.  A CEO is a high-value asset that must be protected.  But protecting doesn’t have to mean precluding.

Engendering trust and esprit de corps forms the foundation for effective leadership communication.  And one of the best ways to achieve that as a leader is to simply permit yourself to be seen and approachable on a regular basis.  Just like Dr. Pratt.