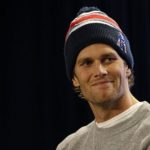 Why is it never enough for the good-looking, rich, talented people to rely on their looks, money, and talent to get ahead?  Why do they frequently look for that one more edge, that secret advantage, that smirky way to cheat – you know, just to make sure they win?

And why, when they get caught, does it generate such relentless waves of joy in the hearts of the multitudinous masses they victimize along the way?

It’s called “schadenfreude,” my friends.  An amazing German word that translates as “hate-joy,” and means “taking happiness from the misfortune of others.”  And when those “others” so richly deserve it?  We’re talking schadenfreude with sugar on top.

This preening pretty boy has been the toothy face of the National Football League for years, winning four Super Bowls and three Super Bowl MVP awards.  He works hard, studies film and sets strategies with diligence and skill, and plays like few other quarterbacks in NFL history.  His team, the New England Patriots, has an incredibly annoying habit of finding ways to win, year after year, even with a brilliant but brooding head coach, Bill Belichick.

In every cheesy movie about summer camp, where the hard-knock lovable-loser kids can be found on one side of a lake, and the stuck-up entitled rich kids reside on the other, Brady, Belichick, and the Patriots are the rich jerks everybody loves to hate.

So why do they feel the need to cheat the system?  The rich campers do it in the movies.  Belichick did it a few years ago, videotaping the opposing team’s defensive coaches’ calls to give his team an unfair edge.  “Spygate,” as it came to be known, cost the Patriots draft picks and Belichick some serious cash in the form of fines to the league.

Then, this past week, we learned that an independent investigator fingered Brady and two Patriot equipment handlers for deflating game balls during last season’s league championship game, the precursor to the Super Bowl.  (A slightly deflated football gives the quarterback a better grip, for more accurate passes.)  Dubbed “Deflategate,” it has so far meant a four-game regular season suspension for Brady, along with a $1 million fine to the team and the loss of two drafts picks.

But why such a hefty set of punishments over a couple of footballs deflated to a minor degree?

Well, to my way of thinking, the NFL didn’t come down on Brady with both boots because of the rules violation itself.  It threw the book at him because he lied about it, and refused to cooperate with the investigation.

People are generally willing to forgive just about anything, if the person at fault admits it and appears to be sincerely remorseful and ready to make amends.  But nobody likes a liar.

Bill Clinton wasn’t impeached for his sexual shenanigans in the Oval Office; he got himself impeached because he lied about it.  Martha Stewart didn’t serve time in prison because of her shady financial transactions; she got tossed into the slammer because she lied about it.

So, just like those smarmy a-holes across the lake in the teenager summer camp movies, Brady, Belichick, and the Patriots eventually got their comeuppance.  When you’re that good already, for God’s sake don’t look for ways to cheat.  And if you get caught cheating, for God’s sake don’t lie about it – ‘fess up and take it like a man.

Because if you don’t, the rest of us – the ones who can’t stand your strutting and your lording your superiority over us – are gonna savor the deliciously delectable display of watching you twist slowly, slowly in the unforgiving wind.