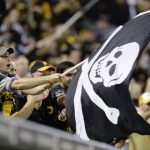 Three years before he was even born, it started.

One inning away from the World Series.  One fluke hit, one bad throw to home plate from left field, one missed tag, and the Pittsburgh Pirates’ fall from the precipice of winning baseball began.

As an infant, we dressed him in Pirates t-shirts.  The Bucco games were always on the TV.  As he got a little older, at sandlot T-ball games he and his friends would pretend to be Pirates players.

Entering elementary school and Little League, his interest in baseball only grew.  We went to games sporadically at the then-brand new PNC Park to see the Bucs play.  Yet we knew that our hometown team would remain the perennial underdog, chalking up losing season after losing season, year after year.

One summer, in fact, we had a 10-game season ticket package for Sunday afternoon games.  Some wonderful dad/son bonding moments over the course of those 10 contests, but we only witnessed two wins.  That’s tough for anyone to take, much less an idealistic 11-year-old who was still waiting for his heroes to achieve a winning season.  On Sunday afternoon games, kids were permitted to go down on the field after the game to run the bases.  He never did.  It’s hard to make your legs run when your heart keeps getting broken, I guess.

We attended a game one season where the Pirates’ wallowing in futility had reached an especially painful nadir.  The team had gone on a 13-game losing streak, but at the next game – the one we went to – third baseman Freddy Sanchez hit a home run in the ninth inning over the left field wall to win the game.  You would have thought we’d won the World Series.  The crowd (such as it was) at PNC Park went absolutely wild.  And all because a crushing losing streak that season had ended.

In 2013, it happened again, and with the same results.  But instead of snapping a 13-game losing streak within a single season, this year’s Buccos ended a 20-year streak of losing seasons.

And the crowds at PNC Park – breaking attendance records all over the place – have gone even crazier.

The first milestone came with the 82nd victory of the year, guaranteeing the first winning record since 1992.  Then came a guaranteed spot in the post-season playoffs.  Then a victory against the Cincinnati Reds in a wild-card game to move further into the playoffs – a night at the ballpark that has become the stuff of legend, as waves of pure joy, redemption, and happiness poured from the crowd, across this city, and through television screens nationwide.

Last Wednesday night, though, the magic ended as the Pirates lost the deciding Game 5 of the National League Divisional Series to the St. Louis Cardinals.  But Bucco skipper Clint Hurdle, as always, saw the evening’s outcome in the proper light, telling his players, “Don’t be sad it ended; be happy it happened.”

All I know is that all through this enchanted spring, summer, and autumn of baseball in our hometown, as we flew the “Jolly Roger” flag from the front of the house, and attended some victories, and enjoyed the fireworks, and listened to the guys call the games on the radio, and dressed in our Pirates T-shirts, and enjoyed this last season together before he goes off to college next year, there’s really only one thing to say.

Thanks, Cap’n Clint and the entire Bucco crew for bringing back the pure enjoyment of winning baseball to all of us.  We proved to the nation that Pittsburgh has always been and will always be a great baseball town.  It’s been an amazing year, and we can’t wait for Spring Training to start in 2014.  Beat ‘em, Bucs!