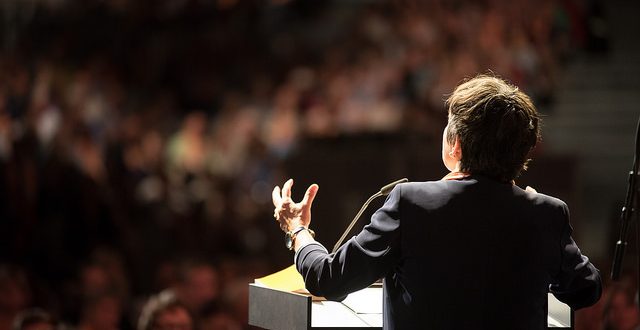 The Big Idea: People may hear facts, but they listen to stories.

Amid economic challenges, companies need to transform themselves, adapting to survive and even move ahead. But given the volume of coverage and advisory-oriented information out there, surprisingly little attention is paid to the role of one important person – the CEO.   What can this key leader do?

According to management consultants McKinsey & Company, the first thing CEOs should do is something I agree with a thousand percent. CEOs must make their organization’s transformation meaningful by making it personal, and they should do that through storytelling.

“People will go to extraordinary lengths for causes they believe in, and a powerful transformation story will create and reinforce their commitment. The ultimate impact of the story depends on the CEO’s willingness to make the transformation personal, to engage others openly, and to spotlight successes as they emerge,” say the experts at McKinsey, and they’re right.

I wrote a speech for a client some time ago that proves the point. This gentleman had been named CEO of a company he had worked for all his life, succeeding a much younger man who had been brought in from the outside but who had passed away quite unexpectedly. While the younger CEO had done a fine job improving efficiency and shareholder returns, he lacked interpersonal skills and internal morale had suffered.

The new CEO, conversely, having been such an old hand within the company, was well-known and even more well-loved. He believed – truly believed – that when people came first, business results would follow. And that message served as the central theme of the speech I wrote for him, as he addressed all employees in his first act as CEO.

He told stories drawn from the people who mentored him as a young man, those who worked alongside him, those who inspired him, and those who came to look up to him over time. He tied these wonderful, warm stories to his vision of where he wanted the company to go. He told the people of the organization he now led that he needed them to believe in each other the way he always believed in them.

And by the time he was finished, every one of those 2,400 people – whether they were in the same building, or watching via video across the company footprint – would have run through a brick wall for him.

He made the transformation personal through heartfelt stories. There’s no reason that CEOs in any organization, regardless of the challenges they face, can’t achieve the necessary transformations the same way. It can’t be faked. It can’t be half-hearted. But when it’s done well, it can’t be denied.

A great speech delivered with conviction can transform people and organizations.