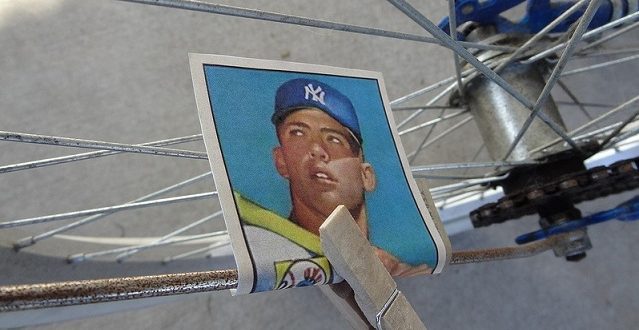 Growing up in an urban middle-class neighborhood, boys like me dreamed of getting a mini-bike. And not a small bicycle, mind you, but a mini-bike – a miniature motorcycle.

The noise, the power, the ability to go a hell of a lot faster than your scrawny little knobbly-kneed legs could take you. We knew of a couple of kids who actually got mini-bikes, and behind our Chamber of Commerce smiles, calculated to convey intense and sincere friendship – and nothing says friendship like letting a buddy take a spin on your mini-bike, right? – we secretly hated their guts. Mostly because they never – ever – let us ride.

So the best the rest of us adolescent yonkos could hope for came down to taping baseball cards to the rear post of our regular bicycles, so that when the back wheel started to rotate, the card would slap against the spokes and simulate the sound of a motorcycle.

Hey, when you’re 13 and broke, you make the most of the situation. We were MacGyvers before MacGyver was cool, all right?

Even this process required some forethought and careful evaluation. You didn’t want to tape a Roberto Clemente card back there, and let it take the tremendous beating those spokes were preparing to deliver. No, instead you fished out a handful of potential sacrificial lambs from your box of old baseball cards.

Guys like Vic Davalillo, yeah, he could get spoked. Milt May? Probably. You stopped and debated Steve Blass, though. He did win that seventh World Series game in Baltimore, but then the poor slob completely forgot how to pitch. Blass got the reprieve and was tossed back into the shoebox, but he’d be in the bullpen should the other two guys flame out too fast.

While out pedaling around the neighborhood with two friends, our baseball cards emitting roars of simulated combustion-engine power, we took a break in a nearby park when my friend Mikey made one of the most interesting suggestions of my early teenagerhood.

He pulled out from his back pocket not a baseball card, but a playing card. And not just any playing card. This one had a naked girl on it.

Mikey had five older brothers, and he took full advantage of one of the great features of such a sibling set-up – he had open access to all of their nasty, naughty, never-to-be-discussed-with-Mom-and-Dad items. As long as he didn’t get caught, that is. Every couple of weeks, Mikey’d show up with bright red mark across his cheek, or a puffed-up eye. That’s when we knew Mikey’s big brothers had caught him messing with their stuff.

On this day, however, Mikey made it out of the house not only alive, but with one of the most hallowed treasures a gang of sheltered 13-year-olds could imagine – a card with the portrait of a girl with no clothes on.

“Okay, guys, who wants it for their bike?” Mikey asked.

“For our bikes?” cried Dean. “Mikey, are you nuts? We can’t tape that to our bikes. Plus, why would you want to? We ought to find a good rock to hide that under, so we can come out here all the time and look at it.”

“Nah, I swiped this to go on somebody’s bike,” Mikey insisted. “It’ll make the same sound, but whoever gets it will know how great his noisemaker really is! Let’s shink on it. I got evens. Ready?”

After a couple of rounds of shink (where two guys put up fingers, with the winner determined by whether the total is an even or odd number), guess who got the naked-lady noisemaker?

That was, until we were pumping our bikes up the back alley, just as my Mom started pulling her car into the garage as she came home from work.

“Hi, boys,” she called to us, as I just kept pumping up the hill, no time to talk Mom, very busy here, need to keep moving, you know, pedal, pedal, pedal.

“Hey, come back here and say hi to your Mom – what’s the matter with you?” Mikey teased, a smirk beginning to form in the corner of his mouth, the bastard. He’d set me up.

“Look, we all put baseball cards on our spokes to make noise like a mini-bike,” the shrimpy little sadist explained to my mother. “I have Johnny Bench on mine.”

As I made a U-turn to come back to where they were talking, I “lost my balance” (wink-wink) and fell off the bike. An unbelievable coincidence, as it turns out.

“Are you all right? What happened?”

“I’m okay, Mom,” I said, with some difficulty. It was pretty hard to enunciate with all of that coated plastic on the roof of my mouth.

“Whose card is on your bike, Honey?”

“Oh, my old one flew off. I’m putting Steve Blass on next.”

Fifteen minutes later, we gathered in that park again. Miss Four of Diamonds, having been in my mouth all that time, lost some of her allure, to be sure. She never made it back onto any of our bikes again, but we did visit her regularly when we would pull her out from under a really good rock.

A MacGyver always makes do, you know.