A Study In Trash 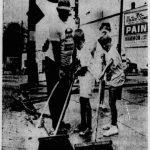 Would you trust a bunch of 12-year-old boys, armed with brushes and stencils and buckets of oil-based paint, turned loose on the utility poles of your local municipality’s main business district?

Well, they did in 1973.  And pockets of proof can still be seen, barely, all these years later on a handful of those old metal standards.

As the U.S. of A. approached its Bicentennial in 1976, the borough thought it would be a nice idea to repaint the metal poles along the business corridor – red and white stripes on the lower three feet or so, and blue with white stars for the upper three feet.  And they let us kids do it.

You can bet I got onto that crew, pronto.  That’s because every other kid working that summer Saturday was engaged picking up trash and depositing it into red, white, and blue barrels with “Help Keep Mt. Oliver Clean” stenciled onto them.  An image of one of those barrels, in fact, could be seen on the free T-shirts we all wore during this participatory exercise in civic pride.

Of course, “free” can be a relative term.  Officials from the borough did not charge us money when they handed out the T-shirts, true, but we worked for them nonetheless that blistering day.  Inhaling that oil-based paint in high-90s temperatures?  By dinner, we didn’t know our last names.

Then there’s the story of how the T-shirts even made it to Mt. Oliver for the big day at all.  I had never heard this until very recently – more than 40 years after the fact – but my Dad and another father had to drive, on extremely short notice, across state lines into the dark recesses of rural Ohio to pick up boxes of shirts that the silk-screener never shipped.

Not exactly “Smokey and the Bandit” smuggling Coors beer east across the Mississippi, but every bit as thrilling, no doubt.  What Dads don’t do, huh?

I remember “Help Keep Mt. Oliver Clean” day quite vividly.  Not because painting iron telephone poles was such a jolly job, but because my friends and I felt pride in helping our hometown get spruced up.  We liked our town, we liked the fact that we lived there, and we liked the idea of pitching in to make it even better.

Years later, during my time working for the state Transportation Department as a district PR representative, I got assigned management of the annual “Keep Pennsylvania Beautiful” project for our six-county region in the Laurel Highlands.  This KPB job had been a moribund millstone around my boss’ neck for years, and he took great delight in sloughing it off on the new guy.  Me.

Whether I took it as a personal challenge to prove the boss wrong, or whether I felt compelled to conjure up positive vibes from the good old days in Mt. Oliver with my trash barrel T-shirt, but by the time the big KPB day rolled around two months later, our district had quintupled the number of Cub Scouts, Girl Scouts, entire classrooms and school buildings, civic clubs, you name it, participating.

We had secured sponsorship by a regional convenience store, a bottling company, and a snack food producer, to provide a free lunch to all participants showing their KPB badge.  We had conducted nearly 30 school assemblies to generate awareness and interest.  Our little district, so often left in the dust, turned the project around so impressively that the Secretary of Transportation made a special trip to join some litter-pickup groups, and even got his free hot dog, Coke, and bag of chips at the convenience store.

Turns out that being a good citizen has multiple additional benefits.  At least it has for me along the way.

Today is Earth Day.  All over the nation this weekend, you can find local municipalities sponsoring events, including civic cleanup projects and other initiatives to take greater care of the resources entrusted to us.

If you are taking part in one of these activities, that’s great.  If you haven’t, then please try to do all you can to keep your little section of the world clean and green.  Or organize a cleanup day yourself.  Or make your elected and appointed representatives know that this subject deserves our ongoing attention and action. 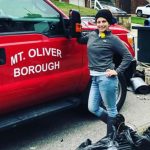 Photos posted on Facebook last week show how cleanup efforts continue in my old hometown.  It’s great to know that, decades after we jumped in with our paint brushes and trash barrels, people still care enough to Help Keep Mt. Oliver Clean.

Hope it’s the same where you live, today and every day.  Happy Earth Day.