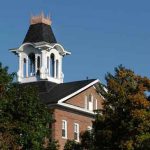 This weekend marked Homecoming at my alma mater, of which my wife and I took part, and which has stirred up all sorts of fantastic memories of those first days on campus, way back when.

The summer before I left for college, I had to be the most annoying teenager in three counties.  Not because of any inflated sense of self.  Not because of any over-eagerness to be away from my great family.  But simply because college represented the Next Big Thing, and I could not wait to start.  Being the oldest kid made it all the more exciting, since I’d be the first to experience it.

We all drove up to the campus on move-in day and got my side of the room all fixed up.  No roommate had been assigned yet, so I had the place to myself for the first two or three weeks.  I can remember that first night, alone, wide awake, thinking and wondering and guessing what the morning – and every day thereafter – would bring.

A flyer in the stairwell instructed freshmen who wanted a small refrigerator to take a cash deposit to a dorm across campus.  After handing over my deposit, I asked, “So, when will the fridge be delivered?”  The person in charge said, “Delivered?  Are you serious?  No, you gotta take it yourself now.”  That day I learned to appreciate the difficulty in carrying one of those little square monsters three-quarters of a mile back to my room.  See?  My education had begun already!

In those days, freshmen did not register for their first semester classes online, in seconds, weeks and months before ever showing up as students.  No, no, no.  We had a little slice of character-building hell called Arena Registration.  You’d get in line at the gymnasium – actually, the line extended outside the gym building – with your preferred class schedule in hand.

As the line slowly snaked to a bank of about four students at bulky, rudimentary, pioneer-days computers, you handed over your hoped-for schedule.  The longest 60 seconds of every semester then began, as you waited breathlessly for the computer’s verdict.  Would your schedule go through on the first try?  If so, start the party.  If not, you got one more shot while still in the batter’s box.  And if you didn’t have an backup schedule ready, it was back to the end of the line, buddy.

Next came the bookstore wars, where hundreds of kids at a time would bump, stomp, reach across, and generally behave like unwashed heathens to each other, trying to find the right books for their classes – all inside a bookstore that had failed to expand along with the student body.

But then, after all of these initial hurdles and growing pains, the first morning of classes arrived.  I still can envision myself, with a vividness and clarity of memory you save for those “I will remember this for the rest of my life” moments, coming out of my dorm and walking to the nearby science building for the opening class of Biology 101.  Even though I really could have done without biology, that short walk into that first college class made me so happy and meant so much.

Over the next four years, I met the girl who became my wife, I made some lifelong and truly best friends, I had more fun and worked harder than at any other point in my life, I learned a lot about subjects I’d never thought of before, I became a confident professional in my chosen field, and I learned how to solve problems and get along with people and become a productive member of society.

Just like damn near every other person who ever finished college, in other words.

What is it about those four years of your life?  That’s really not a very long span, in the grand scheme of things.  But people, decades removed from their days on campus, still identify themselves vociferously and ferociously as products of their school.  Humans are tribal beings at heart; maybe that’s part of it.  The simple truth, though?  Things happen, influences converge, and people intersect in ways that transform green teenagers into college graduates and the people they’ll be the rest of their lives.

I know my school did that for me.  And I’ll always be grateful for those four amazing years.