Dear Coward in the Cadillac 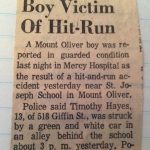 Dear Coward in the Cadillac,

You won’t remember my face, I’m sure, but if you saw me today the same way you did on that March afternoon in 1974 – as I sailed 15 feet into the air, after being launched by the front end of your speeding green Caddy – it might sufficiently jog your memory.

Yeah, I’m that kid you hit that day, as I walked to my safety patrol post.  Ironic, right?  On the way to help other elementary school students cross the street safely, I’m the one who takes it on the chops.  And you really made a nice, clean hit, too.  Let me tell you about it, since your recollection of the event must be minimal.

Patrol boys like me got to leave 10 minutes before the rest of the students, to get to our posts on various street corners around the school.  An alley ran behind the school building that normally got barricaded on both ends with wooden horses, but the janitor hadn’t taken care of that detail yet on our special day, leaving the alley open for traffic as an irresistible short-cut, am I right?

As I walked down an outdoor set of concrete steps and turned the corner of the school building onto the alley, there you were, racing your Cadillac down the narrow blacktop lane.  Gosh, you must have been doing 45 miles per hour, if you were going 5.

The impact occurred so suddenly – your timing impeccable, congratulations! – that your front bumper slammed into my left thigh as soon as I cleared the corner of the building.  I still have a small dent in the side of my left leg to this day, in fact.  No wonder I think of you often, Mystery Man, more than 40 years later.

The aforementioned janitor was cleaning up a room on the first floor, and looking out the window, horrified, he saw everything that happened next:

2) I landed on my head and suffered a cracked skull.

3) Blood was coming out of my ears.

4) You slammed on your brakes, and then pulled the coup de grace of this entire episode.

5) You threw that Caddy into reverse and fled the scene, never to be found, identified, arrested, prosecuted, fined, or incarcerated.

After three days in a coma, my brain slowly, softly, swimmingly floated back into somewhat of a normal consciousness.  They say your mind is smarter than your brain sometimes, and I believe it, because I have no sentient recollection of being struck, or lying on the pavement, or the chaotic scene that must have descended around me as the rest of the school let out for the day and saw me sprawled, unconscious, in a pool of my own blood.

But, hey, it got my name into the newspaper for the first time!  As an aspiring journalist, that had to count for something.  Not quite a byline, but baby steps, you know?

My point in writing this letter to you, whoever you are (or were), is to let you know that – despite your best effort to leave me for dead – I made it.  With the help of an incredible family and supportive friends (you should have seen the welcome back party they threw for me in my eighth grade class, about three weeks later), I went on to high school and had a great time there.  Next came college and on the second day of freshman orientation – the second day! – meeting the girl I’ve been married to now for 32 years.  We’ve raised a family that makes me so proud I could bust on a daily basis.

I suppose what I’d like for you to most clearly understand is simply this.  That I won.  And that you lost.

If any cosmic justice exists, I hope that the despicable, cowardly, inexcusable act you committed that day – not even so much that you hit me, but that you ran away and left me there – has haunted your dreams every night for the past four decades.  Or, on the other hand, I hope that remorse and guilt has led you to become a more responsible, accountable, upright person.  Either option’s okay with me, frankly.

My heart and my faith command me to forgive.  Then I reach down and feel the 40-year-old dent in my left leg, and forgiveness remains a challenge.  Still trying, though.

Surviving and thriving, I remain –