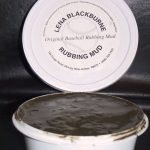 It states that umpires must rub down six-dozen baseballs with mud before each game to take off the sheen and improve the grip.  To put that into context, with roughly 114,000 baseballs used in the majors each season, if each mud-rub takes even 30 seconds, that’s nearly 40 days – working 24 hours a day – spent on this odd-sounding task.

What’s the deal with this magic mud?  Will any kind of glop or slop do the trick?  Does this explain why umpires always look so angry during the game?  Who made this bizarre ritual a formal rule of baseball?

Well, as it turns out, this “meme of the mud” began eight decades ago when a batter died after being struck in the head by a baseball.  The pitcher’s grip had slipped while throwing the shiny ball toward home plate.  League officials experimented with mud mixtures using infield dirt easily within reach to make the baseballs easier to handle, but consistency and uniformity eluded them.

Then in 1938, Lena Blackburne, third-base coach for the former Philadelphia Athletics, had an idea.  He began looking at the mud along the tributaries of the Delaware River in his native New Jersey, until he found a source of muck – described as a cross between chocolate pudding and whipped cold cream – he thought would do the trick.  He was proven correct, and old Lena hung up his cleats and got into the baseball rubbing mud business.

From that day to this, each July, crews from the Lena Blackburne Rubbing Mud Company take a boat out to the mysterious, hidden “ole mud hole” – the location of which is kept top-secret – and scoop up hundreds of pounds of the slop, enough for one season. Then it rests in barrels until the next spring when it’s packed and shipped to each of the major league teams, minor league teams, most independent leagues, and many colleges in time for opening day.

So, other than to pass along some funky sports trivia, why do I share this story with you, Dear Reader?  Well, it’s to pose a simple question to tickle your brain today.

What is your “magic mud?”

What’s that curious, interesting, secret tidbit of information or insight about you that makes your life a little easier to handle?  For some, it might be an active prayer life.  For others, it could be a physical talisman, like a coin or a photo, that serves as a source of inspiration.  Or it may be a spouse, a sibling, or a best friend who always knows just what to say and when to appear.

Life can be slippery sometimes, even when things look clean and shiny and brand-new.  A little friction can slow things down, let you get a better grip, maybe even save your life.  We’re all just trying to drive our little vehicles, to continue on our individual journeys, but occasionally we slam into one of those 20-car pile-ups on the amusement park Bumper Cars.

But guess what?  Those messes always get untangled and we move on again.  I think, though, that when we have good people, good memories, and good intentions riding along with us – when we recognize and appreciate our own special brand of “magic mud,” in other words – the joy truly is in the journey.