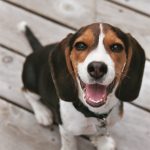 Why do some apparently insignificant events from decades past stick to the brain like Velcro?  The human mind must be wired to insist on closure, a sense that a matter has been settled to one’s satisfaction, before that nagging memory can be released at long last.

Or, in my case, maybe I’m just a nut who can’t let some things go.  You make the call.

Six or seven years old, a little kid in a middle-class neighborhood in the city, and I wanted what a lot of other boys in that situation wanted.  A dog.  A pet.  A buddy to play and mess around and get into trouble with.

And, like most young boys, I found ways to insufferably make this particular argument over and over with my parents, until finally they relented and we went to the local animal shelter to do a little window-shopping.  Yeah, window-shopping my foot.  I knew we were coming home with a dog that day, and so we did.

Looking at all the puppies available, my eye landed on a white-and-brown speckled beagle, and it was “game-over” in a flash.  My Dad took care of whatever paperwork and payment they required, and we left for home with my new doggie.  I named him “Yogi,” probably after Yogi Bear, which had been a popular cartoon at the time.

We fixed a little dog house for Yogi on the back porch, because one of the ground rules was that he would not have free run of the inside of the people house.  I took care of his food and water – or, I did so as well as any little kid can – and made sure he got his exercise.

Being a pup, Yogi did his share of chewing up carpet and drapes, which never earned him high scores with my folks.  But more important, being a beagle, Yogi barked.  A lot.  And had the smell of a hound-dog, which can be rather distinctive.  The houses in our neighborhood had been built very close to each other, so the joys and the issues of keeping a beagle puppy – who slept outdoors, no less – became a community proposition.

One summer morning, after we’d had Yogi for about a month, I went downstairs to check on him and give him fresh food and water.  I looked on the back porch in his little shelter.  No Yogi.  I looked all over our tiny back yard.  Not there either.  In the garage?  Nope.  The neighbors’ yards?  Up and down the front street and back alley?  Not a trace.  Yogi was gone.

I was told he must have run away, wriggled under the gate in the back fence somehow, and took off.  And I guess that made some sense.  Yet he’d never tried to run off before, I couldn’t help thinking to myself.  It felt devastating – knowing that my dog was gone, sure.  But also knowing that a little splinter of doubt about what really happened had begun to gnaw and knead itself into my subconscious – a situation that would continue unabated for some 45 years, until just a few days ago.

During a recent get-together at my present home, I was talking with my Dad when my yellow lab came up to us.  That got us talking about my very first dog all those years ago in the old house, when he said, “Yeah, we had to take him back to the shelter.”

“No, he didn’t.  But that was the explanation that we thought you could accept.  We weren’t ready for a dog back then.”

Perspectives change, of course.  After my wife and I have now raised three grown children, I appreciate what happened to Yogi as responsible parenting and gracious neighboring.  No hard feelings.  My kids will probably remind me of some long-buried occurrence someday years from now, as well.  I hope Yogi eventually found a little kid and a family better equipped to give him an awesome life, barky and smelly as it might have been.

But best of all, it feels great to finally remove that nagging, jagging, pestering, festering splinter from my psyche.  Closure is a wonderful thing.