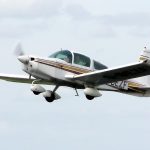 It’s funny how, as you get older, what used to be minor concerns blossom into full-blown fears.

Claustrophobia, for example, has seized a major part of my brain, to the point where every elevator ride becomes an epic test of willpower.   Not crazy about heights any more, either.

One particularly brutish day, I got stuck in a gridlocked traffic jam while at the midpoint of a bridge.  So I had nowhere to escape, with little hope of any forward movement, all the while hovering 500 feet over a river – a hellish blending of both phobias at once.  I threw the car into park, got out, walked around to the passenger side, and asked my wife to drive, so that I could close my eyes and try to calm down.

Not one of my finer macho moments, shall we say.

You would think, then, that getting on an airplane would freak me out, as well.  But for some reason, that experience really doesn’t bother me all that much.  And I think I know why.

Fresh out of college, working my first job as a general assignment reporter at a small town newspaper, I was instructed to go out and do a story on a local flying club.  After making the arrangements with the folks at the tiny asphalt landing strip they called the local airport, I drove out to talk with the area aviators.

Getting to interview those guys turned out to be a very enjoyable afternoon.  I learned a lot about the lure of navigating small aircraft, how free and joyous a person felt while gliding around with nobody else up there.  This was going to make a terrific feature article.

Then one of the guys said, “Hey, you want to go up?  I’ll take you for a spin around the county.  That’ll make your story even better, don’tcha think?”

So, amid some happy chatter and a couple of odd chuckles among the flight club fellows, I, ever the fearless intrepid reporter, instantly agreed to the invitation.  So the pilot and I walked out to the prop plane, climbed in, buckled up, and before I knew it, we had become airborne.

Everything I’d heard in the previous hour about the sense of freedom while flying got validated, and in spades.  We saw the main town, the adjacent university, outlying communities, the beautiful topography, some industrial sites and coal mines – and all from a perspective that you typically would never get to enjoy or appreciate.

After being up in the air for 45 minutes or so, I thought it was only fair to tell my pilot buddy a little secret.

“Hey, you want to know something?” I said, over the roar of the propeller.  “This is my very first time in an airplane!  And I think this is one of the greatest things I’ve ever been able to do!”

The pilot started giggling, then broke into a full-throated laugh.  A bit confused by his response, and recalling the snickering the other guys had done before we took off, I asked why he was laughing.

“Well, guess what – I have a little surprise for you, too!” he shouted, in between laughs.  “I just got my solo license two days ago!  You’re the first person I’ve ever flown with who wasn’t a pilot, too!”

I’ll tell you, that plane couldn’t land fast enough after that.  But I figured, if I could handle that as my first experience flying, nothing else could ever shake me about getting on a plane again.