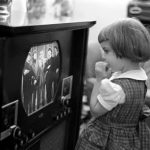 Exactly 50 years ago tonight, February 9, 1964, Ed Sullivan, with his famously awkward arm-swooping motion, introduced the Beatles to the American television audience, and changed the world.

Check the clip on YouTube.  It’s utterly fantastic.  Girls in the audience, inside the small theater along Broadway from which Sullivan (and later, David Letterman) broadcast his Sunday-night program, screamed so intensely and vocally that the mop-topped Fab Four could hardly be heard – even with microphones piped directly to the live feed.

Some 73 million people – equating to more than 23 million American homes, 45% of the entire U.S. population, and 60% of all American televisions – sat transfixed in their living rooms and dens to see The Beatles’ first live performance on U.S. soil.  CBS received more than 50,000 requests for tickets to the 700-seat theater.

Only 77 days prior to The Beatles’ appearance on the Ed Sullivan Show, President John F. Kennedy had been assassinated. By now, the country was ready for some much-needed joyful diversion, and it came in the form of four young lads from across the pond.

“Now, yesterday and today our theater’s been jammed with newspapermen and hundreds of photographers from all over the nation, and these veterans agreed with me that this city never has witnessed the excitement stirred by these youngsters from Liverpool who call themselves The Beatles,” said Sullivan in his introduction.  “Now tonight, you’re gonna twice be entertained by them. Right now, and again in the second half of our show. Ladies and gentlemen, the Beatles!”

And the British Invasion landed, in a splashy blast of driving drums, gritty guitars, cheerful harmonies, and lots and lots of hysterically screaming young ladies.

But, even while I personally was too young to remember this happening live, the thing that appeals to me about the Beatles’ debut on American TV is that the nation felt this shared experience as one.  We don’t see that happening very much any more, unless it’s a national tragedy or emergency.

I can’t remember the Beatles on Ed Sullivan, but I do remember watching that show every Sunday evening in later years.  Laughing along with Stiller and Meara (yes, Ben Stiller’s parents were tremendous comedians long before he got into the business), Burns and Schreibner, Allen and Rossi, and Topo Gigio the mouse.  Sullivan would throw some crazy stunt acts like acrobats, plate spinners, and magicians into the mix as fillers between the headliners, too.  It made for a thoroughly enjoyable 60 minutes of entertainment with which to wind down a weekend.

No tricked-up competitions, no winners or losers, no drama or hyped conflict.  Just a fun hour together at home with your family, and across the continent as the American family, sharing something on a regular basis.

Today, we have hundreds of channels on TV, plus video games, the Internet, texting, Tweeting, Skypeing, Hulu, Netflix, and whatever else from which to choose our entertainment.  It’s all so individualized now, which in some ways can be great.  But in a larger sense, it takes away from the shared experience that used to be the norm.

Do I miss that?  To borrow a phrase conveyed 50 years ago by four young Liverpudlians – yeah, yeah, yeah.