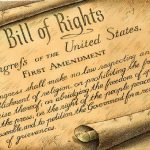 In the new film “The Post,” the Nixon White House in 1971 attempts to squash release of the Pentagon Papers, a secret and unflattering government assessment of the Vietnam War.  The administration threatened the publisher and editor of The Washington Post with contempt – a federal offense, punishable by imprisonment – should they decide to publish their reporters’ stories.

During the internal deliberations, the newspaper’s attorneys argue that if publication of those documents occurs, then The Washington Post would “cease to exist as we know it” – to which Ben Bradlee, the editor, counters, “If we let the government tell us what we can and cannot publish, then The Washington Post has already ceased to exist as we know it!”

Freedom of the press was enshrined in the Bill of Rights as the First Amendment.  Not the Second, the Fifth, or the Ninth, but the First.  There’s a reason for that.  Just ask that tall, red-headed fellow holding the quill and parchment.  I yield the floor to my colleague from Virginia, the right honorable Mr. Thomas Jefferson.

“No government ought to be without censors; and where the press is free no one ever will.”

As Supreme Court Justice Hugo Black noted, in the ruling that supported the right of the press in the Pentagon Papers case, “In my view, far from deserving condemnation for their courageous reporting, The New York Times, The Washington Post and other newspapers should be commended for serving the purpose that the Founding Fathers saw so clearly. In revealing the workings of government that led to the Vietnam War, the newspapers nobly did precisely that which the founders hoped and trusted they would do.”

Presidents through the centuries may not always like it – Jefferson included – but the critical function of an independent press to an informed and functioning democracy cannot be denied.  Jefferson came to truly hate the reporters who covered his administration, but he never lost sight of why they needed to coexist, and never tried to prevent them from doing their jobs.  How could he, when he said things like:

“The freedom of the press is one of the great bulwarks of liberty, and can never be restrained but by a despotic government.”

“Our liberty depends on the freedom of the press, and that cannot be limited without being lost.”

“The only security of all is in a free press. The force of public opinion cannot be resisted when permitted freely to be expressed. The agitation it produces must be submitted to. It is necessary, to keep the waters pure.”

To keep the waters pure.  That’s a wonderful line, and one that needs to be studied, thought through carefully, and safeguarded today as in few other periods in my lifetime.

We hear about “draining the swamp.”  We hear outrageous statements like, “I alone can fix it.”  We have been overrun for decades, long before even the current administration came into power, by a toxic bravado on both ends of the political spectrum.

A deafening cyclone of anger and accusation, where everyone shouts and no one listens, where to attempt compromise equates to surrender and punishment.  Any victory must be complete.  Any loss only incurs an ever-expanding reservoir of cunning and hate, as a precursor to total, sweeping, devastating revenge.

But when the guiding philosophy comes down to an eye for an eye and a tooth for a tooth, the only result can be a nation of the toothless and the blind.  We need to relearn to respectfully disagree by listening first, talking second, then finding and achieving success in areas of shared priority.

And we need to respect those professionals whose job entails shining a light on those conversations, those plans, those attempts to influence decisions that affect millions.  We need to acknowledge and appreciate, not denigrate or let others insult, a free press.  Again, Mr. Jefferson says it best:

“Were it left to me to decide whether we should have a government without newspapers or newspapers without a government, I should not hesitate a moment to prefer the latter.”

Each accusation of “fake news” tears at the fabric of our democratic standards.  There can be news reports that you don’t like or don’t agree with, assuming a bias on the part of the reporter or news organization.  That doesn’t automatically make the news report fake or false.  There can be – and sometimes are, since reporters are human too – news reports that contain errors of fact.  When discovered, they get corrected.  But even errors do not make the report fake or false.

My fear comes in wondering whether these insistent cries of “fake news,” “alternative facts,” and similarly nonsensical accusations and affirmations could actually take root in the minds and opinions of American citizens.  That could lead to a national trauma, whereby the only information accepted by people comes directly from the government – with no other way to validate, verify, or challenge it.  Few things would be more dangerous or damaging, as Jefferson knew:

“The most effectual engines for [pacifying a nation] are the public papers… [A despotic] government always [keeps] a kind of standing army of newswriters who, without any regard to truth or to what should be like truth, [invent] and put into the papers whatever might serve the ministers. This suffices with the mass of the people who have no means of distinguishing the false from the true paragraphs of a newspaper.”

An ill-informed, lackadaisical populace is the best friend of a government bent on steamrolling over the opposition, including the rights of those who put it into office.  We cannot permit that to happen.  The Washington Post realized this in 1971, as Richard Nixon sought to crush press reporting that exposed 30 years of misleading propaganda regarding Vietnam.  The Supreme Court, in a 6-3 vote, clearly and definitively told Nixon that the Constitution said otherwise.

Are we still that diligent about the First Amendment today?  If not, why not?  A responsible citizenry requires that we demand accountability from our government at all levels.  And the best way to achieve that on a consistent basis is through a free and unfettered press, doing its job, warts and all.

Let’s give Tommy J. the last word, thoughts every bit as prescient now as they were in his colonial times:

“No experiment can be more interesting than that we are now trying, and which we trust will end in establishing the fact, that man may be governed by reason and truth. Our first object should therefore be, to leave open to him all the avenues to truth. The most effectual hitherto found, is the freedom of the press. It is, therefore, the first shut up by those who fear the investigation of their actions.”