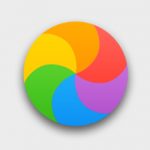 You’ve seen it.  Hanging there, suspended in space and time.  Rotating, revolving, silently mocking you and your foolish plans.  Ha-ha!  Bathed in the primary colors of the rainbow, seemingly full of fun and mirth.  As if.

But you know better.  Oh, yes.  You understand.  This is nothing to toy with, even though it looks like a toy.  This mute little circle has come to hijack your day, locking up your laptop, never telling why, striking without warning, a silent assassin.  Worse, it will stay there as long as it damn well pleases.  And there’s not a blessed thing you can do about it, you Bill Gates Wanna-Be.

Computerized condolences, my friend.  You have been visited, violated, and victimized by The Spinning Beach Ball of Digital Death.

The most frustrating part of these episodes comes in the fact that they happen seemingly out of the blue.  You’re buzzing along, getting stuff done, working away, feeling good about life – and then, everything comes to a full stop.  Noooo!  Then starts the waiting for whatever circuitry or software to reconnect or repair itself.

And all you can do is stare at The Spinning Beach Ball of Digital Death.  Open another tab?  Nope.  Get out of that program while things sort themselves out?  Uh-uh.  Take a ball-peen hammer to the keyboard, or perhaps run screaming out into the street?  Maybe.

Or just shut the stupid thing completely off and start over, hoping against hope that whatever you’d been working on will miraculously reappear in a fully formed and pristine state?  Yeah, that’s probably the way to go.  Although you really don’t expect your work to come back so cleanly, do you?  Nah, didn’t think so.

Hopelessness and helplessness never make for a fun pairing.  Even so, there is much we can learn from The Spinning Beach Ball of Digital Death.

For example, life can be an unending process of handling crap you never expected, considered, deserved, or prepared for.  But you still have to think and pray and act and fake and maneuver your way through it.  Try getting fired, with a young family and a mortgage in tow.  You find out pretty fast what you’re made of in that scenario, trust me.

Some people discover peace in patience.  I have never counted myself among that lot.  But the older I get, the value of this practice becomes more apparent.  When technical interruptions occur, the temptation to fly into a rage at an inanimate object with no sentient feelings to be hurt has lessened greatly.  Now I go make a sandwich and just wait it out instead.

It helps to think that it had been somebody’s job, somebody got paid, to invent that little ball of chromatic torture.  He or she spent days, hours, weeks, figuring out a way to let users know that something funky just happened inside their laptop – and that they would be in for a wait.

Is that icon meant to hypnotize?  To lull you into a state of dreamy nonchalance?  To have you flip the switch in your brain onto auto-pilot, so that the irritating situation becomes less irritating?  If so, it’s rarely worked that way for me.

It’s happened twice already today, and I know it will happen again.  That little jagoff on my screen, slowing me down, speed-bumping my train of thought, having a good laugh at my expense.

But that’s okay.  You do your thing, Spinning Beach Ball of Digital Death.  We have plenty of fresh bread and lunch meat in the kitchen.  Time for a sandwich.