Another day of shining sunburst broke through the hotel window, another day full of promise and potential during a week in central Florida with my son, Chris, following our beloved Pittsburgh Pirates around during Spring Training 2017.

We got up and ready to head out, jumped in the rental car, and started off.  Not to McKechnie Field – the Bucs’ home stadium in Bradenton – that would come a little later, closer to game time at 1 p.m.  No, our first stop this day would be Pirate City, a training complex of multiple baseball fields and an impressive central building where players could eat, attend classes, get medically treated, and bunk if they needed to.

Going down to Spring Training had long been a “bucket list” item for Chris and me, and even though it might have stretched the budget to its outer limits – and then some – we decided to quit talking about it and go for it while he was still in college.  The trip to this point had been all that we had hoped for, and more.  Two guys, two buds, turned loose in the gorgeously warm and inviting month of March in Florida.

Chris and I took a similar guys-only trip to Phoenix three years ago as a high school graduation gift.  And, as one would expect given such circumstances, we came back with some awesome and awesomely funny stories.  Our Floridian odyssey was turning out to be no different.

For instance, our plane needed to be de-iced in Pittsburgh, which meant we sat waiting on the tarmac for two-and-a-half hours.  A college-age girl sitting next to Chris fell asleep.  When she woke up, she said, cheerfully, “Wow!  We’re here!”  Then another seatmate told her we hadn’t left Pittsburgh yet.  The way that poor kid’s face crumbled and transformed from joy to shock to sorrow to anger to acceptance – all in about three seconds – struck me as nothing less than astounding.  The Seven Stages of Grief, in fast-forward!

Then we lived through the week-long Bob Evans follies.  For whatever reason, we got breakfast almost every day at this Bob Evans restaurant across the highway from our hotel.  I think, after a certain point, it was primarily for the comedic value.  Our first morning, the line was out the door, so we sat at the counter.  Abby, our young, fresh-scrubbed waitress, wiped off the Formica countertop, took one look at the two of us in our head-to-toe Bucco garb, and chirped, “Pirates…that’s baseball, right?”  This, in the city where the Pirates have held Spring Training since the Truman Administration.

The next day, Marianna sidled up to our booth and said, “You fellas ready to order?”  “Uh, we don’t have any menus yet.”  “Oh.  Well.  Umm.  This is my first week.  Do you know what you want?”  “No, we don’t quite have the Bob Evans menu completely committed to memory just yet.  Could we get two menus, please?”

Later in the week, a different waitress took our orders and as she collected the menus, said to Chris, “Thanks, Darlin’!”  Then looked at me and said, “Thanks, Lumpy.”  I dare say they could use some more staff training at that particular franchise.  It kept us laughing, though.

So, back to our morning at Pirate City.  We’d never been there, of course, so it was all new to us.  We parked the car and started walking down this long pathway to the practice fields, passing a small set of bleachers under an arched canopy, then through a wide-open gate that led to the point where about five fields converged.  Each field buzzed with practice games and other activity, the smell of fresh grass and infield dirt wafting on the breeze, the lively chatter of players and the crunch of metal cleats being heard.  To diehard baseball fans, especially Pirates fans like us, we had arrived.

If someone had asked us, like in the movie “Field of Dreams,”  “Is this heaven?”, there could be no doubt what we would have answered.

Taking tons of photos with my iPhone, I suggested to Chris that we go up onto the second floor of a small building at the vortex of the fields.  Not noticing any signs prohibiting our ascent, we climbed the stairs and got an even better view of all the action across the diamonds as I kept snapping away.  Then we heard another sound, not quite as pleasant or friendly.

“You two!  GET DOWN…NOW!!!”  Yep, a security guard in a red windbreaker, getting madder and madder, had indeed been shouting at us to get off that second-floor perch.  We came back down the steps and got screamed at for going up to where only the families of players and coaches could sit.  I apologized, while pointing out that no signage explained that fact, and that it was an innocent mistake.  The guard looked at me sideways, huffed a little, and walked away.

We hung around for a while longer, eventually taking a seat on the bleachers we’d passed on the way in.  After another inning or two, the practice game in front of us finished and visitors started heading back to their cars.  I said to Chris, “I have an idea.  Follow me.”

Walking back toward the central facility, I handed Chris my iPhone and said I wanted to find that security guard again and have us take a picture together.  “Are you sure about this?  That guy sounded pretty mad at us,” asked my son, who in so many ways is wiser than me.  (He takes after his mother that way.)  “Yeah!” I replied.  “What’s the worst that can happen?  If he throws us out, we were leaving anyway.  But I think something else will happen.  Watch this.”

We waited until the guard finished closing up one of the gates to a practice field, then I called to him.  He came over, still kind of giving me the side-eye.  Then I said, “Sir, I feel bad about what happened before.  Would you mind if we took a picture together?  My son can take it for us, if that’s okay with you.”

And, in similar fashion to the sleeping girl on the airplane, this fellow’s face transformed, but in reverse order – from suspicion to shock to surprise to doubt to joy.  “Why sure, I’d love to do that for you and your son!” he replied with a smile.

He and I stood arm in arm as Chris took the shot, and it remains one of the absolute highlights of the trip for me.

As Chris and I walked back to our car, I said, “Did you see what happened there?  I wonder whether anybody has ever asked that fellow to pose for a photo before.  Yeah, he was pretty mad at us, but I had a feeling we could turn him into a friend.”

Friends are everywhere.  All you have to do is be a friend to them first, I guess. 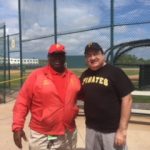