A Golden Day for a Yellow Lab 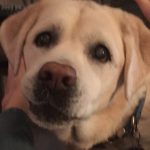 As we stepped onto the back patio of a family’s house in Ambridge, PA, one midsummer morning, the litter of yellow lab puppies they had for sale went berserk, yipping and yapping, running and jumping, tumbling and tussling.  A cacophony of noise and energy that enveloped me, my wife, and our kids, who were still of elementary school ages at the time.

Amid all of this canine chaos, though, one pup laid perfectly still underneath a metal porch chair.  She didn’t seem scared, just content to watch the goings-on with a “roof,” more or less, over her head.

We test-drove some of her brothers (too loud and aggressive) and sisters (the kids didn’t feel a spark with any of them), and finally asked if we could hold the lone holdout before we left and tried another litter somewhere else.  The second those kids got their hands on that docile doggie, though, I could tell.  Game Over.  A unanimous vote.  They had found Our New Dog.

On the long drive home, as our freshly picked pet sat in a cardboard box in the car, we took turns tossing out potential names.  Eventually, feeling patriotic with the Fourth of July fast approaching, we decided on “Libby,” short for “Liberty Bell.”

The reason for bringing a puppy into the house stemmed from the imminent passing of Kayla, a great old golden retriever that my wife and I had well before any of the kids had been born.  Kayla’s back legs had deteriorated to the point where I had to carry her outside to do her business – a situation that, obviously, could not continue indefinitely.  For a brief time, we had both dogs in the house, which helped the kids – and us – make the transition after Kayla had to be put to sleep.

Today marks Libby’s birthday – which I’m told makes this her “golden” birthday (turning 15 on the 15th).  She’s been a good dog, never barks, very friendly but not overly so.  She absolutely adores my wife, following her every move, waiting for crusts and scraps.  She’s been a loyal companion and a great nurse, always sticking closest to any member of the family who has either become sick or is about to do so.

The dog knows she’s not the pack leader, though, always giving me plenty of space and deference.  Hey, I’ll take it wherever and however I can get it.

She’s not without some pretty weird idiosyncrasies, however.  Libby has never climbed a flight of steps, which means she has no idea what the basement or second floor of our house look like.  She will wait until my wife starts to rub my back while sitting on the couch watching TV, before coming over to get petted with my wife’s free hand.  She has a way of standing directly between the remote control and the cable box, effectively blocking the signal to change channels and adjust the volume.  And she knows just where to plop her 80-pound carcass to cause the maximum traffic backup for people trying to step from one room to the next.

Yet, all things considered, Libby has been a great fit for our family.  After 15 years, though, time has marched on.  Our kids have either finished college or are almost there.  The house feels a lot more empty than it used to be.  And after 25 years of picking up dog poop in the yard, I’m about ready to hang up my shovel.  We want to be able to travel and visit our kids and their future families in the years to come, so we’re nearing the end of the line when it comes to pet ownership.

But more important, Libby’s back legs have begun to deteriorate.  It’s getting harder for her to make it outside to do her business.  I’m afraid we’ve been down this road before.  Someday, maybe soon, maybe not for a while, but someday we will be making that final, quiet, lonely ride to the vet.

For today, though, we’ll celebrate Libby’s golden birthday and, later, she’ll take a well-earned rest in her favorite spot in the house – content to watch the goings-on, laying right under the coffee table, with a nice “roof,” more or less, over her head.