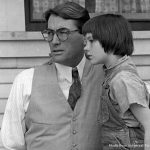 Since the line at our local Barnes & Noble didn’t look very long, I strode up to the counter and pre-ordered my copy of Go Set a Watchman, the anticipated sequel to one of my very favorite books, To Kill a Mockingbird, by Harper Lee.

Oprah has called Mockingbird, first published in 1960 and winner of the Pulitzer Prize, the “national novel of the United States.”  The movie adaptation earned eight Academy Award nominations and three winners, including one for its star, Gregory Peck, who took the Oscar for Best Actor for his portrayal of Atticus Finch – a character subsequently named the No. 1 movie hero of all time by the American Film Institute.

That’s quite a lot of history and admiration to live up to.

In Mockingbird, the story is told from the first-person perspective of a young girl, Jean Louise Finch, better known as “Scout.”  Her father, Atticus, works as an attorney in a small Alabama town and agrees to defend a black man falsely accused of raping a white woman who lived with an abusive father.  Atticus loses, the black man is shot while attempting to escape prison, and the derelict father – an avowed racist – tries to kill Scout and her brother, Jem, before dying himself in the attack.

The book deals with heavyweight issues of race, class, justice, cowardice, prejudice, and loss of innocence.  But by having the lovable tomboy Scout relay the story, Mockingbird truly soars, with lyrical prose and a gentleness of pace, making the difficult lessons somewhat easier to process and digest.  The widowed Atticus stands as a tower of principle, a rock of integrity and honor, who does the right thing even when it may cause uncomfortable, even dangerous, ripple effects for him and his children.

As Scout and Jem watch the end of the trial from the courtroom balcony, among the black attendees forced to view the proceedings from there, the Rev. Sykes scolds Scout as Atticus packs his briefcase and starts to leave the now-empty courtroom below, saying, “Miss Jean Louise, stand up.  Your father’s passin’.”

The following morning, in the aftermath of the conviction, a neighbor, Miss Maudie, confides to Scout and Jem, “I simply want to tell you that there are some men in this world who were born to do our unpleasant jobs for us.  Your father’s one of them.”  There is no assailing Atticus Finch.

So imagine the shock and surprise to read early reviews of Go Set a Watchman screaming that Atticus Finch was really a racist all along!  But, sticking to my policy of not letting reviewers tell me what my opinion of a book or movie should be, I picked up my copy and read it in a single day.

In my interpretation of the story, Atticus is still heroic.  He is the “watchman” of the title.  In Watchman, he attends a local “civic council” meeting where an unrepentant racist (imported from Massachusetts, we later learn) is free to spout his hatred, and Atticus even once attended a Klan meeting, some 20 years before Mockingbird’s story unfolds.  These revelations undoubtedly led to the hysterical cries of “bigot” hurled in recent press stories against him.

So why do I think he is still a hero, if not in the “bronze-statue-in-the-town-square” sense of Mockingbird?  Because Atticus does these things to understand all sides of an issue before the real conflict begins – to safeguard his family.

Watchman is set in the late 1950s, after the Supreme Court’s famous 1954 decision in Brown v. Board of Education, which desegregated American schools.  In the story, Atticus silently works to find a balance within the law to navigate the soon-to-come storm, even as people on both sides of the racial divide in this small Southern town start to harden their positions – including Scout’s beloved Calpurnia, the Finch’s black housekeeper who in Mockingbird represented the maternal guidance Scout lost when her own mother died.

Scout, as an adult New Yorker in her late 20s in Watchman revisiting her hometown, remains as impulsive, passionate, and reckless as ever.  She mainly reacts to things in this new book, occasionally making a fool of herself.  Scout may be older, but not much wiser, here.  Atticus, nearly crippled by debilitating arthritis, is both.

Harper Lee actually wrote Go Set a Watchman as her very first novel in 1957.  An incredibly astute editor convinced her to deconstruct it, rewrite it, and move the story two decades earlier, when Scout and Jem were just kids growing up under Atticus’ care.  That’s how To Kill a Mockingbird — actually her second novel — came to be.  Knowing that bit of history, something told to me many years ago by my first boss, the managing editor of a newspaper, makes even more sense today.  He said, “There is no such thing as good writing; there is only good rewriting.”

While Watchman is an okay read, I can’t imagine it being purchased, debated, loved and cherished a half-century later, as Mockingbird still is.  Harper Lee may have been better off one-and-done.  As usual, Oprah’s right.  To Kill a Mockingbird remains our national novel.