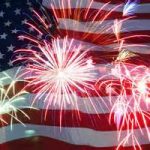 “Do they have the Fourth of July in England?” asked Sister Joachim, my fourth-grade teacher.  My hand shot up instantly.  “Mr. Hayes?”

“Yes, they do – it’s the day after the third of July,” I proudly proclaimed, refusing to fall for the crafty nun’s trick question, and earning the snide sneers of my fellow pint-sized Catholics.

Where I grew up, we loved it even more, because the tiny municipality where we lived blew damn near its entire civic recreational budget each year putting on an all-day and well-past-nightfall celebration.  My buddies and I couldn’t get enough of it.

We’d head down to Transverse Park – right over the hill from my house, and the place where I spent most of my childhood, other than school and bed – as early as possible, to help the grownups set up a row of about 20 wooden booths out near the left field line of the baseball diamond.

Most of the booths hosted games of chance, like throwing darts at balloons, the fish pond, ring toss over empty Pepsi bottles, and plenty more.  The rest served up hot dogs, hot sausage sandwiches, hamburgers, penny candy, all the good stuff.

And the best part?  As we helped set up the booths, we’d get a quarter here, a buck or two there – providing most of the dough we’d need later to play the games and eat the grub!  Oh, it was awesome.  Practicing capitalism on the Fourth of July!  How American can you get?

My Grandma lived about two blocks from the park on the other side, so just as the sun would start to bake the grass and dirt to a toasty temperature around lunchtime, we would head over there and get in on the big family get-together.  My Dad and uncles would be sitting in the shade, sipping cans of Iron City, listening to the Pirate game on the radio, and keeping an eye on the coals in the Hibachi.  (Yes, I know.  We were eating down at the park, also.  But when you’re nine, you can eat your weight in burgers and hot dogs and never feel a thing.)

After lunch at Grandma’s, all my fellow male cousins would join us back at the park to watch the annual Donkey Baseball game (yes, it’s grown men playing baseball on the backs of actual live donkeys – don’t ask – but it was hilarious), the Little League championship game, a concert by a local band on a separate stage, and of course more chances to win and eat at the booths.

As evening approached, the party at Grandma’s broke up and we all headed back to our houses to rest up for the main attraction – fireworks!  Our strategy, perfected after years of observation and adjustment, included getting to the far end of the park and planting ourselves long before dusk, just as the firemen began stringing the rope to keep spectators safe.  Our noses came right up to that rope, so we had front-row seats to all the action.

While people waited for the sky to become dark enough to start the show, the firemen entertained us with a battle to see which team could propel a barrel on an elevated line to the other side, using firehoses.  If anybody’s house actually caught fire on the Fourth of July, they would be good and truly screwed, since the entire brigade was otherwise occupied at the park.

The fireworks seemed to get bigger and better each year, but we had even more to see than the stuff up in the sky – we had “groundworks” too, special pyrotechnic features set up at eye level.  When the groundworks lit up the name of our town (“MT OLIVER”) in five-foot letters, that became the cue for the Grand Finale to begin.

Excited, exhausted, stomachs extended, another Fourth would come to a close and we’d head home to collapse into bed.  But come the dawn, we’d be down the park again, carefully combing acre upon acre of grass, picking up a treasure trove of loose change dropped by revelers the day before.

I mean, how American can you get?  You gotta love the Fourth of July.  And for us, the fifth wasn’t all that bad, either.