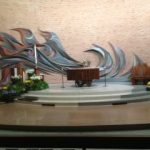 The first time I saw the place, it made me confused, angry, and upset.  Eight years later, I got married there – loving it then, and loving it still.  Allow me to explain.

My family had piled into the Chevette and taken the 60-minute ride to visit one of my cousins, a student at Indiana University of Pennsylvania, or IUP.  She was five years or so older than me, which would have meant I had just started high school at the time.

The IUP campus nestles in the town of Indiana, PA, along the lower foothills of the Allegheny Mountains.  At that time, most of the academic buildings clustered around the central beating heart of the campus, a two-acre stand of majestic trees known as the Oak Grove.  Thick with squirrels, the Oak Grove proved the highlight of the visit, as my Dad chased one squirrel around with his Bell and Howell 8mm camera for about 10 minutes, making for some compelling living room projector-screen viewing in the days to follow.  We were city people, you understand.

Later, my cousin led us down a hill to a building she said was amazing.  We were going to love it.  She couldn’t wait to show it to us.

Approaching it on foot, I thought the architecture looked odd.  A circular structure.  Quite unusual.  But, hey, I thought, this is a college campus.  I guess this would be the place for some off-the-wall architecture.  Then she told us it was the campus church.  The Roman Catholic campus church.  And that’s when I really got skeptical.

The church we attended at home stuck to the rules.  The building itself had been constructed in the form of a cross.  White marble, housing the gold tabernacle, stood behind the altar.  Lots of gold candles everywhere.  The 14 Stations of the Cross lined the side interior walls of the church, one by one, in order – seven down one side and seven up the other.  Traditional, solid, permanent.

But what was up with this place?  A circular church?  Whoever heard of such a thing?  Then we went inside, and my early-adolescent guard shot up and solidified.  Behind the avant-garde early-70s-style altar, a swishing, swooping sculpture lined the entire back wall, with what I could only guess was the tabernacle in the center.  Even the floor gave one pause, with swirling color patterns emanating from the altar out into the congregation.  The Stations of the Cross had been grouped into a single carving along the back wall of the sanctuary.  Absurd!

This was too much to handle.  Why did the people behind this place feel compelled to buck tradition at every turn?  During the ride back home, the images from that church continued to bother me.

Fast-forward four years.  Now a freshman at IUP myself, I met a very pretty and sweet girl during the first week of orientation.  We discovered we both were Catholic, and she asked if I would come to Mass with her that Sunday morning.  Having at least some semblance of common sense, I of course agreed, forgetting about how the campus church had troubled me those years before.

We walked into the church, now crowded with student worshippers, and somehow the place felt better.  More welcoming.  Warmer.  Maybe the girl next to me helped change my attitude, but I liked where I was a lot more than the first time I had set foot there.

There’s a part of the Mass where the priest asks everyone to offer a “sign of peace” to those around you.  All I did was to reach out and hold her hand.  We looked at each other, and the deal was struck.  For life.

A month after we graduated together four years later, we got married in that church – almost 33 years ago, now.  Funny how wrong we can be when we refuse to widen our minds.

Today, I have the best reason of all to return to the IUP campus – our son attends the university as a freshman this year.  And with each visit, I make a point to walk into that campus church, sit in a pew, admire its beauty, soak in the peace it provides, and thank God that I was proven wrong.