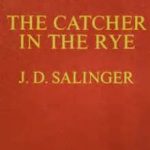 It quickly became the first book I couldn’t put down.  The one I read over and over again, underlining sentences that I thought were especially funny or pointed or that sounded like they came straight out of my head.

“The Catcher in the Rye,” by J.D. Salinger, in 12th grade high school advanced English.  When it became the first assigned reading during my freshman year in college, as well, I remember writing my high school English teacher to tell him how happy I was.

Holden Caulfield’s odyssey from prep school expulsion to a lost three days in New York City hiding from his parents before sneaking home to say goodbye to his little sister has served as the baseline description of overwrought adolescent angst since its publication in 1951.  And maybe that’s the problem I find myself facing today.

For as much as I identified with some, not all, of Holden’s cynicism as a teenager and college student, when I read that book today as a 52-year-old husband and father, I have to say much of the thrill is gone.  Sure, it’s still funny in spots, sad in others, but I find I have a lot of trouble identifying with Holden’s predicament now.

He constantly dubs adults and peers as “phony,” and without a doubt some people truly are.  Yet from my perspective today, a lot of that name-calling in the book only serves as a way for Holden to avoid his own phoniness, shallowness, inexperience, and immaturity.

He swims in a sloppy, sloshy pool of fantasy and invented adventure.  What appealed to me back then as a harmless diversion today instead reads like a harmful delusion.  Holden needs to escape to a world of his own making, because he can’t handle the reality of his own life.  A life of failure and confusion, much of it self-generated.

My observations may strike you as the grumpy rumblings of a codger-in-training, and maybe they are.  But maybe they’re also the reflections of a point of view that, by necessity, changes over time.  Maybe they’re the sound of a mind that’s been through enough “stuff” over the years to appreciate the difference between what’s worth worrying about, getting worked up over, and deserving of attention and effort – versus what’s simply not.

So much of what troubles Holden on his ever-deepening journey into despair and isolation really shouldn’t.  His older brother becomes a screenwriter.  His father is a corporate attorney.  His younger brother dies as a child.  His baby sister idolizes him.  His old girlfriend is always just a phone call away, but he never makes the call.  In one way or another, each of these facts becomes a source of piled-up frustration.

Salinger never wrote a sequel to “The Catcher in the Rye,” but if he had, I would hope that Holden would have eventually learned that assigning value or meaning to one’s own life has nothing to do with how others live theirs.

Holden tells his kid sister, Phoebe, “What I have to do, I have to catch everybody if they start to go over the cliff – I mean if they’re running and they don’t look where they’re going I have to come out from somewhere and catch them.  That’s all I do all day.  I’d just be the catcher in the rye and all.  I know it’s crazy, but that’s the only thing I’d really like to be.”

You learn as you get older that Holden’s aspirations are not only way too grand, they’re ill-advised, not to mention downright impossible.  Save yourself first.  Choose to be happy.  The rest usually takes care of itself.