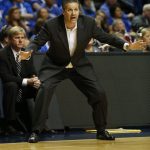 I bet I knew what John Calipari was thinking.

“I’ll go back home, have a really good spaghetti dinner with my folks, then get to this tiny gym and watch my guys wax this little nobody school.”

Well, he got some of that right.  Calipari, the head coach of the University of Kentucky basketball team, did come back to his hometown of Moon Township, Pennsylvania, just west of Pittsburgh.  And his squad did play the team from Robert Morris University in the first round of the NIT tournament.

I have no idea whether he actually had spaghetti with his folks before the game, but it might be a safer bet that he was popping Alka Seltzer tablets like M&Ms afterward.

Kentucky – the national champions in the NCAA Men’s Basketball Tournament one year ago – were the ones who got waxed by little Robert Morris earlier this week, losing by the score of 59-57.  It was such a stunning outcome that on the local news that evening, the Robert Morris game came before the Pittsburgh Penguins winning their 10th straight NHL game that same night.

In the NCAA tournament still going on, brackets have been busted at an alarming rate, as major basketball powerhouses find themselves on the short end of the stick against schools they should have no trouble crushing.  At least on paper.  But when you get on the hardwood, in a neutral venue, with a national audience for every single game, what things look like on paper may have no resemblance to what happens in 3-D.

Many sports enthusiasts, me included, consider the NCAA tournament the best sporting event of the year, precisely because of this unpredictability.  “Cinderella” teams spring up, defying all odds.  My question always becomes: Why?  How?  What combination of factors lead to these startling victories for the little guys and demoralizing defeats for the supposed giants?

Here’s my theory.  Competition makes everyone better.  But to win in those competitive scenarios, you need to properly and fully respect and prepare for your opponent.

Goliath thought he’d step on that little shepherd kid and grind him into the dirt.  David prepared and knocked him cold.

IBM thought it had the market cornered for the next century by focusing on computer hardware.  Bill Gates had another idea with Microsoft, focusing on software as the path to riches.  IBM scoffed and gave him the opening he needed.

College football teams often schedule “cupcake” opponents for the first one or two games of the season, considering them easy targets and a means of tuning-up for the “real” games to come later.  Last year, this approach backfired in embarrassing fashion for the University of Pittsburgh, as the Panthers got manhandled by the featherweight Penguins of Youngstown State, 31-17.

This principle plays out millions of times every day, in every social and professional and personal situation you can imagine.  Competition, when permitted to operate freely and fairly, makes everyone and every organization better.  But being better is not always enough to succeed.

To win, you must respect your competitor.  Understand their motivation, their starting base of knowledge, and their competitive advantage.  And most of all, prepare to both address those factors while pressing your own advantage.

It’s been said that luck is the place where preparation meets opportunity.  Last Tuesday night, in a little gym in Moon Township, Pennsylvania, the once-proud national champions of college basketball learned that lesson the hard way.  Pass the Alka Seltzer.