A Triumph, You Say? 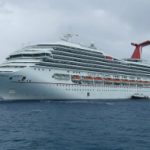 We have never been big on cruise ships as a vacation destination.

The sense of isolation while out at sea, the potential for high drama in the bathroom given the rocking motion, the fear of needing serious medical attention that can’t be easily obtained – no thanks, we’ll stick to sitting on the beach and just looking at the ocean, not riding on it.

With the disastrous voyage of the Carnival Cruise Line’s “Triumph” ship over the past couple of weeks, I’d say our impression of adventure on the high seas has been validated.

The Carnival Triumph, while on a four-day cruise that departed Galveston on Thursday, Feb. 7, experienced an engine room fire the following Sunday morning and lost propulsion in the Gulf of Mexico. The ship’s automatic fire extinguishing systems activated and the fire was successfully extinguished, thank goodness. Fortunately, there also were no injuries to guests or crew members.

My parents took a cruise for one of their major anniversaries years ago, and had an enjoyable time for the most part.  One of the things that sticks in my mind is a story my Dad likes to tell.  One evening, feeling like having a snack before bed, he called room service (or whatever you call that on a ship) and asked for a ham and cheese sandwich.  Fifteen minutes later, the guy shows up at their door with an entire deli tray of lunch meats, cheeses, breads, condiments, and drinks.

The extravagance of it all.  The decadence.  It felt like 18th century France just before the revolution.

So imagine these poor revelers on the Triumph, after spending what they thought was their final night on board, digging into deli trays delivered by room service, drinking, dancing, having a grand old time before returning to port the next day.

Left without any power whatsoever, the Triumph also lost all heat, all ability to prepare hot foods, all water recirculation so only four toilets worked to serve the thousands of deli tray-powered digestive systems on board, and no lights for the lower decks without windows.  People were left sleeping in tents on deck.  And I don’t even want to know how the toilet thing got addressed.

“Lord of the Flies” aboard a dead ship in the middle of the Gulf of Mexico!  Call Spielberg!

To their credit, all reports verify that the crew of the Triumph performed admirably, doing everything they could to keep their guests as comfortable as possible – which, by the time the odious and odoriferous odyssey ended earlier this week, must have been reduced to keeping people from jumping over the rails and swimming to shore.  Any shore.

Finally, tugboats pulled the weary Triumph into port at Mobile, Alabama, and the stunned cruisers ran for dear old terra firma.  Carnival arranged for, and covered the cost of, ground transportation to get the people back to their point of origination in Texas.

Then one of the buses broke down on the way.  Yeah, the good times never stop on a Carnival cruise.  Now strap yourselves in for the parade of lawsuits.  If Carnival thinks a credit for another cruise is going to satisfy this bunch, they’ve been drinking too much sea water.