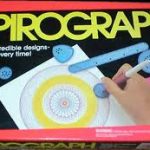 One of the most enjoyable toys when I was a kid had only three moving parts – a pen, some plastic pieces, and your brain.

A box full of different plastic discs with teeth around the edges and holes in various spots.  You’d line up the disc against an outer frame that also had teeth.  You’d let the two sets of teeth mesh, stick the pen in one of the holes and start moving the disc around and around.  For a verbal person like me, who revels and delights in words, Spirograph allowed me the illusion that I could be visually artistic, too.

Long before computers did most of the thinking for us, Spirograph challenged the user to imagine a design – or even better, to just start and see how the design would take shape.  So simple, so surprising, so much fun.  And all from just going around and around and around.

Case in point?  Heck, pick up the newspaper any day of the week.  Pay attention to what comes out of people’s mouths, regardless of what the issue might be.  From blustering and bloviating testimony before Congress to Lance Armstrong’s halfhearted confession to Oprah.  From evasive non-responses from defense attorneys on local TV news to the customer service desk of your favorite computer company.

What’s the problem?  Is it that people are so afraid of litigation or retaliation that they’ve decided it’s easier to verbally obfuscate?  Have we become so skittish to be honest and direct that we’re constantly hiding, hoping to run out of the line of fire without being confronted?

I’m as guilty as anyone on this score.  In high school, I loved being in the band and I loved having the respect of the band director.  At one point during my senior year, I lost my folder of music.  But my convoluted adolescent sense of logic told me to not say anything and to try to play my part by memory, because that folder was bound to pop up any day now.

Naturally, that ruse didn’t last more than a couple of days.  I was busted, and it tainted the band director’s opinion of me for the remainder of my senior year.  The fact of that still hurts to this day.  And all from going around and around and around, stalling for time, dodging the truth, avoiding facing the music, as it were.

(The folder did turn up a few days later, by the way.  A sworn high school enemy had stolen and hidden it.  We’re 35 years on now, and my hatred for that guy remains to this day, as well.)

How much more smoothly would the world spin if we all stopped spinning our messages?  Yes, telling the truth can be tough.  It makes a mess sometimes.  But it also identifies the messes that need to be cleaned up, so that we can get on with it and keep going – stronger, more confident, more proud.