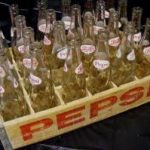 Reality TV hadn’t been invented yet.  Or it hadn’t yet been foisted upon a fetid, pudgy, limp-minded American population, is perhaps a better way to state it.  But if it had existed back then, I knew a household that might have garnered its own slow-motion train-wreck of a show.

I never even knew their last name, and the only connection came through a friend in a grade above me who was in the same class with one of the sons.  They lived in a rickety narrow old house, perched tenuously on the side of a steep hill, faded and dented sagging aluminum siding somehow hugging the structure.

It took what seemed to be about a hundred steps to get from the sidewalk to their front porch, but my buddies and I willingly and eagerly made that cardiac climb about once a month.

For a treasure could be found there.  A treasure that was ours for the taking.  Free money, for minimal effort.  In fact, the hermits inside that creepy hillside hideaway were happy to have us make our semi-regular visits.

For, you see, those folks drank Pepsi.  A lot of Pepsi.  Gallons, barrels, rivers of Pepsi.

And they stuck all the empty bottles on the front porch.  Scores of bottles, the old classic glass ones with the contours.  Each one worth two cents in refunds.

Found money, ours for the simple cost of hauling bags full of empty Pepsi bottles about four blocks.  We’d hike up those steps whenever we were broke (which was the natural state of things when you’re in sixth grade), clear off that front porch so you could see all the chipped concrete again, arrive at the neighborhood store and collect our booty.  Oh, the Good & Plentys, red licorice, baseball cards, Bakooza and Bubs Daddy bubble gum, Pixy Stix, Swedish Fish, and gobs of other goodies made it all worthwhile.

Meanwhile, back at Pepsi Central, the mysterious clan kept guzzling pop till the cows came home.  In the race to dental decay, looking back on it now, I’d say it was probably a dead heat – us stuffing our faces with penny candy versus them consuming frightening levels of carbonated soda pop.

This recollection bounced into my head recently when the political dustup started over the president’s statement that “You didn’t build that – somebody else made that happen,” referring to the role of government-provided infrastructure in enabling businesses to operate and succeed.

To my mind, it’s a silly argument on both sides.  Yes, government provides roads and police and fire protection and water and power – all of the things that make commerce safe and possible.  But from where do the taxes come from to pay for these governmental functions?  Taxpayers, who earn their incomes from businesses, that’s who.  It’s symbiotic, and any claims to exclusivity or superiority on either side are bogus, at least in my opinion.

To equate it to my boyhood story, the cavity-challenged family who inhaled cartons of Pepsi-Cola and left their empties on the front porch were like the government.  They made our entrepreneurial exploits possible.  No bottles from them, no dough for us.  As we cleared away the mess from their front porch, it helped them get rid of a problem while providing us with revenue.  Our little “business” could succeed and everybody won in the end.

One man’s trash is another man’s treasure, after all.