A Tradition Wrong as Rain 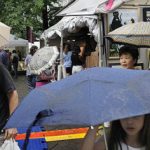 Certain occurrences just happen in nature.  You can’t do much about them, they simply recur with no plausible explanation.  There’s not much else to say.

Each March 19th, the swallows return to Capistrano.

Every 75 years, Halley’s Comet streaks across the night sky.

And in the first week of June, it will rain buckets on the outdoor Three Rivers Arts Festival in Pittsburgh.

Hundreds of artists come to the Downtown area to carefully display their paintings, sculptures, and other works of art that they have so painstakingly and lovingly created.  Row after row of kiosks over acres and acres of parks and mid-town plazas host these wonderful pieces, on display to be enjoyed and sold.  Three different stages serve as hosts to various live performing acts, all available to be enjoyed for free.  Scores of outdoor carts and mobile food stands serve up hot dogs, sausage sandwiches, ice cream, and more tasty treats than you can imagine.  The very popular event draws tens of thousands of visitors each year.

This requires months of preparation, scheduling, assigning of designated spaces, coordination with police and security, street closings and bus rerouting.  It’s one of the biggest outdoor events all year around here.

And it never – ever – fails to rain.  I don’t mean a light, refreshing early-summer shower.  I mean black boiling thunderclouds ominously and quickly rolling in, raining in torrents, lashing high winds, water coming at you sideways, punishing cloudbursts like you’d read about in the Old Testament.  For every annual Three Rivers Arts Festival.  For as long as anybody living here can remember.  It’s actually become a running joke.

The waterlogged event has been that way for so long that, during the summer of 1981 when I was a city desk intern reporter at The Pittsburgh Press, my fellow college interns and I reported for our first day in the newsroom as the Three Rivers Arts Festival opened.

Eager to please as we all were, no one volunteered to take that assignment because we knew that whoever ventured outside that day was gonna get absolutely drenched.  This already had become common knowledge back then, and it’s only been validated every year since.

You know, thinking about it a little more, maybe all the rain actually served as the inspiration for the festival’s name.  Maybe the precipitation that blasts in during this event is the equivalent of the water volume of the actual three rivers around which Pittsburgh was settled.  Just a thought.

I’d feel bad for the organizers of this event, if it weren’t for the fact that they have got to know that this lousy, violent weather is coming during the first week of June.  Every year, for Pete’s sake.  It’s not like we don’t have a running record to make the case.

It can be easy to get stuck in a rut, expecting a different result without making any changes in what’s been done before.  You never try a new restaurant, because you found one you really like.  You don’t take a dancing class or start yoga, because you’ve always felt funny moving around in front of other people.  You wait to be told what to do at work, because it’s just easier to react than to act.

But in avoiding these small steps outside of your comfort zone, think of the opportunities for personal growth, satisfaction, and enjoyment you’re missing.  Bucking tradition is okay.  In some cases, it may actually be the smartest thing of all.

Just ask the thousands of drowned patrons at the Three Rivers Arts Festival this afternoon.